In the Footsteps of Anne Lister (Volume 1): Travels of a remarkable English gentlewoman in France, Germany and Denmark in 1833 (Paperback) 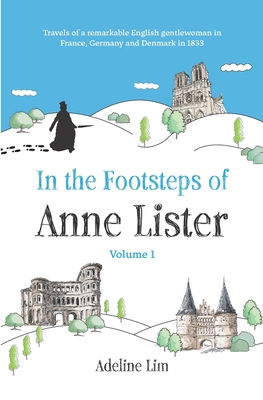 'This solitary journey may do me good. It will shew me how far I may really trust to the resources of my own mind.' - Anne Lister, 29 July 1833 Anne Lister: 19th-century mistress of Shibden Hall, Halifax. Prolific diarist, traveller, adventuress, lesbian. In 1833, she fulfils a long-anticipated trip to Germany and Denmark. She visits landmarks and sights that stand even today and meets celebrated and prominent people who have become immortalised in the annals of history. Adeline Lim: Traveller, history enthusiast. In 2019, seeking a diversion after her dog's death, she finds a worthy distraction in Anne's travels. Their journeys transect the centuries, transcending the passage of time. Through Anne, Adeline discovers a different facet of Europe, one steeped in historical significance brought to life by Anne's words. Adeline travels more than 2,000 kilometres, from the celestial plafond of Saint Paulinus in Trier to the Hanseatic city of L beck, and across the Fehmarn Belt into Denmark to stand in the shadows of the Rundet rn of Copenhagen. Adeline then chases the scent of Anne Lister's trail through Denmark's islands of Sj lland and Fyn back into Germany where she crosses the Elbe to find herself contemplating the distant North Sea, standing on the old pier of Alte Liebe in Cuxhaven, the very one which has withstood centuries of storms, even that of 1833 which stranded Anne in the harbour. Her journey brings her consolation, ignites in her a passion for Anne's travels, and engenders a deep respect for the intrepid Anne. This book contains never before published excerpts of Anne Lister's diary and letters, spanning June to December 1833, maps of Anne's journey and an appendix listing all the villages and cities Anne travelled through or visited in France, Germany, Luxembourg and Denmark, including landmarks that the 21st-century traveller can visit today.