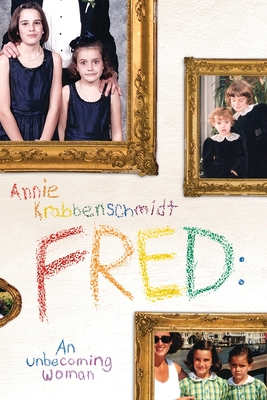 As she recounts the journey from the blissful non-committance of her "straight" origins, to falling in love, to her years spent (shockingly) alone, Annie Krabbenschmidt's debut book is both wickedly funny and heartbreaking. More autotheory than memoir, Fred deconstructs the institution of "womanhood," defying gender and genre.

Fred begins with a reckoning; narrator and author realizes that she is undoubtedly, inescapably gay. The first half of the book is a documentation about what it takes to accept ones sexuality, or even acknowledge it. Annie retells the story of going from unaware high school senior, to closeted lesbian, to deeply in love closeted lesbian. When she realizes that she is ready for love, she enlists friends to help her come out, as slowly and excruciatingly as possible.

After she shares her secret with at least one friend, she takes on the next task - pursuing a relationship with a woman who might also be a closeted lesbian. Almost more painstaking than the process of actually coming out, was the process of confessing her attraction to her first official gay crush. A relationship that is beautiful until it comes to its unsurprising end.

Right as this book reaches its middle, our protagonist is just about ready to launch into her future as an artist, and she finds herself single and sitting in the barstool of a prominent New York lesbian bar, having yet another earth shattering epiphany. She might actually be afraid of lesbians

The second half of the book is a set of thematic essays examining specific components of her life that could help explain the strength of the internalized homophobia that Annie is starting to fight. The book ends with an epic victory earned over six or seven years of work.