A Nation Divided: A 12-Hour Miniseries of the American Civil War: Episodes 101-104 (Paperback) 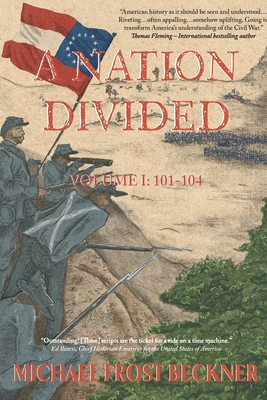 This is book number 1 in the Nation Divided series.

America is under attack from within. A nation divided on every issue. Across the land, political, social, and racial intolerance increasingly turns to violence...

A NATION DIVIDED is a three-volume collection of the celebrated original teleplays for an Event Miniseries of the American Civil War. The series thrives upon the personal relationships of Ulysses S. Grant and Robert E. Lee and their generals. Schoolmates and friends at West Point, they forge a brotherhood in battle fighting side-by-side in Mexico and create blood ties in peace as they marry into each other's families.

With the onset of Civil War, forced to choose sides North and South, our "Band of Generals" and their families must face one another in battle over the soul of their nation.

A NATION DIVIDED focuses on the emotional landscape of these men, their wives, and children, and the men and women of color who live and fight alongside them. Their loyalties, loves, and brutalities are put to the bloody test across the battlefields of five Aprils against the moment they live in and the future they are fighting to create.

Some friendships dissolve into hatred; some families are torn apart by heartbreak; some enemies find grace in forgiveness. Yet, at the end of the bloodiest conflict in our history, the color barrier between black and white in America is transformed, freedom prevails, and the nation reunites to become an enduring beacon of hope to the world.